Posted by Unknown at 4:10 PM No comments: Links to this post 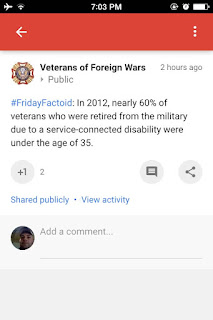 Posted by Unknown at 4:08 PM No comments: Links to this post

With the VA it is Always Worse than expected

Editorial: With VA, it's always worse than we expect

Our View: How many vets died waiting for care? VA records are such a mess that we'll never know.

With the Department of Veterans Affairs, it is always wise to assume things are worse than they first appear.

Since the VA's appalling care scandals were first exposed by The Arizona Republic in early 2014, the agency's problems invariably have proved worse than investigators first were led to believe. A new inspector-general report exposing details of the VA's appalling system of record-keeping validates the cynicism.

As of September 2014, the Veterans Health Administration had approximately 867,000 pending applications, three quarters of which had been created more than five years earlier. Data from the Social Security Administration, a far more professionally run government agency, showed more than a third of those -- 307,000 vets – were dead.

The inspector general launched the investigation at the request of the chairman of the House Committee on Veterans Affairs, Rep. Jeff Miller, R-Fla.

Miller, the nation's most persistent VA detective, had uncovered evidence that perhaps 47,000 vets had died while their applications for VA health care were pending. The true figure proved to be six times greater. Six times worse than he thought.

It gets still more discouraging.

It has been more than 20 months since The Republic's Dennis Wagner first uncovered the VA's duplicitous waiting lists for vets seeking to enter the health-care system. Since then, according to the inspector general, the agency still "has not adequately established procedures to identify individuals who have died, including those with pending health-care enrollment records."

As reported by Wagner, the agency recently submitted a plan to improve its record-keeping technology and practices. We are not hopeful.

Even as it has attempted to address the issues exposed first at the Phoenix VA hospital, the agency has consistently demonstrated an inability to anticipate the level of services that veterans, especially those returning from war, will need. That planning haplessness has sent the VA tumbling into chronic budget shortfalls for two straight fiscal years. When are they going to learn?

The answer to that question is becoming increasingly, tragically, apparent. Perhaps never.

Posted by Unknown at 7:15 PM No comments: Links to this post