A Blockhouse survives as relic to Cold War 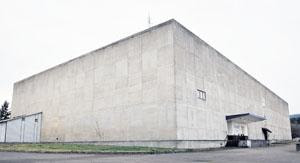 An enormous concrete structure known around Adair Village, or as the Blockhouse is seen on Feb. 19, in Adair Village. The building once housed the SAGE Direction Center, a Cold War-era Air Force installation designed to defend the West Coast from Soviet nuclear attack.

Unmarked and nearly windowless, its perimeter guarded by a cyclone fence topped with three strands of barbed wire, the three-story structure known locally as ‘‘the Blockhouse’’ is a weird sort of contradiction — it’s the biggest thing for miles around, but it’s so utterly featureless that it seems to blend into the background, going almost unnoticed by the steady stream of motorists flowing past on Oregon Highway 99W.

Today it stands cold, dark and silent. But flash back a half-century, and the Blockhouse was a concrete beehive called SAGE, its corridors filled with men and its rooms crammed with electronic surveillance equipment that constantly scanned the skies. The building was a sentinel standing watch against the looming threat of nuclear annihilation. During World War II, the area had been home to Camp Adair, an Army cantonment that held as many as 50,000 men, briefly making it Oregon’s second-largest city.

In 1958, at the height of the Cold War, the site was returned to military control and became Adair Air Force Station.

Adair Air Force Station was headquarters for the Portland Air Defense Sector of NORAD — the North American Air Defense Command — and its main reason for being was the Blockhouse, officially known as the SAGE Direction Center. The acronym stood for Semi-Automatic Ground Environment, a computerized control system for tracking and intercepting enemy aircraft. The Adair installation was one of 22 around the country designed to spot incoming Soviet long-range nuclear bombers before they could drop their loads of destruction on American soil.

Responsible for the defense of eight Western states, the SAGE Direction Center continuously monitored the readouts of 16 long-range radar stations. In case a hostile aircraft was spotted, the station could scramble U.S. jets from the 322nd Fighter Interceptor Squadron at Kingsley Field in Klamath Falls, the 84th or the 456th in the San Francisco Bay Area, the 194th in Fresno or the 190th in Boise.

Although primitive by today’s standards, SAGE was highly advanced for its time.At its peak, Adair Air Force Station was home to 860 Air Force officers and enlisted men and 150 civilian support personnel. Most of them spent their working days inside the Blockhouse, monitoring or maintaining the electronic equipment.

One of those men was Jim Juntunen. Now 69, he’s a retired lieutenant colonel living in Corvallis. In 1963, he was a brand-new second lieutenant on his first posting out of officer’s school.

In his three years at Adair, he worked in the ‘‘blue room,’’ a cavernous space on the third-floor dimly illuminated by the glow from about two dozen computer consoles. As a weapons controller, Juntunen was assigned to one of the consoles, along with a technician.

The circular screen was split down the middle by a line representing the West Coast between Southern Washington and San Francisco Bay, and the operator could zoom in and out to focus on particular sectors.

‘‘We never had a real threat, thank goodness, but we did have instances of unidentified aircraft,’’ Juntunen said. ‘‘Maybe a commercial aircraft had wandered off their flight plan for some reason. We’d have to scramble some aircraft and go out and take a look and see what it was.’’

By checking flight plans and conferring with Federal Aviation Administration flight controllers, SAGE personnel could usually determine that an initially unidentified aircraft was harmless, and not the leading edge of a nuclear strike by Soviet long-range bombers. But not always.

Juntunen recalls one instance when his crew couldn’t identify a plane heading for the Oregon coast. Not sure what they might be dealing with, they sent two F-101 jet fighters streaking from Hamilton Air Force Base in Novato, Calif., to find out.

‘‘They were about 80 miles off the coast when we intercepted them,’’ Juntunen said. ‘‘They identified it as an airliner. They gave us the tail or registration number, and we were able to confirm it with the FAA.’’

While this sort of thing didn’t happen often, Juntunen said, it was probably more common than the American public ever realized because of the stealthy tactics used by Air Force pilots.

‘‘The fighter came up underneath the aircraft, and astern,’’ he said. ‘‘They got up close enough to ID the aircraft and peeled away. I don’t think they ever knew they’d been intercepted.’’

All these years later, Juntunen doesn’t remember exactly what was going through his mind that day when a blip on a radar screen sent his crew into full alert.

‘‘But probably the main thing was ’I sure hope this is some airliner that’s off course, because the alternative is something I don’t want to think about,’’’ he says today.

By the end of the 1960s, the threat of Soviet nuclear bombers had been replaced by the threat of Soviet nuclear missiles and SAGE technology was becoming obsolete. On Sept.15, 1969, Adair Air Force Station shut down, and now the community of Adair Village has grown up in its place. Justus Seely bought the old Blockhouse in 2002 with plans to lease it to industrial tenants, but he hasn’t had many takers.

His countertop and floor covering business occupies about half of the 40,000-square-foot ground floor, with the other half rented out as storage space. The rest of the building is empty. Scavengers have picked over the building pretty thoroughly, but a few Cold War relics remain.

The basement, set up as a fallout shelter, still has a small cache of Civil Defense supplies — cans of emergency drinking water, a tin of survival wafers, a sanitation kit — stored just in case the unthinkable happened.

But up on the second floor, in the very heart of the giant concrete cave of the Blockhouse, one key part of the old SAGE installation remains: the War Room. It’s a glassed-in cubicle looking out over the building’s control center, where the station’s top brass could keep track of everything that was happening in the Portland Air Defense Sector.

This is where the sector commander would oversee the constant training exercises that kept his men ready to meet the Soviet nuclear threat — and coordinate the response if that threat ever became real. Today, nearly 20 years after the collapse of the Soviet Union, it’s hard to remember how serious the danger seemed in those days. But for an old cold warrior like Juntunen, the memories remain vivid.

‘‘We had a saying out there,’’ he recalled. ‘‘The saying was, ’This job consists of hours and hours of boredom punctuated by moments of sheer terror.’’’
Posted by Unknown at 9:51 AM