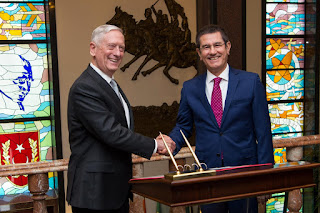 Possible Discussion on the Future of Incirlik AFB?

This was the first meeting between Mattis and Canikli, White said. The two leaders discussed the need for ongoing open and honest dialogue, the importance of integrity of Syria and Iraq and concern over Iran's malign influence in the region, she said.

White said Mattis and Canikli further reaffirmed their shared resolve to defeat the Islamic State of Iraq and Syria.

Later in the day, Mattis met with the Turkish president, and the two leaders discussed regional security and strategy, White said.

White said Mattis expressed to Erdoğan the United States' commitment to its bilateral relationship with Turkey.

Mattis and Erdoğan expressed a shared interest for the two countries to create conditions for a more stable and secure region, she said