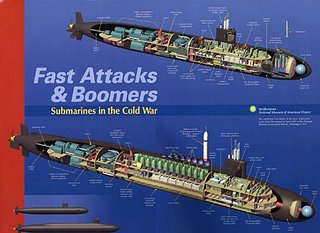 From 1945 to 1991, the Cold War dominated international affairs. The global competition between the United States and the Soviet Union took many forms: political, economic, ideological, cultural. At times the constant arms race burst into armed conflict. But overshadowing all was the threat of nuclear war.

Despite vast numbers of tanks, warships, and other conventional weapons, nuclear weapons defined the Cold War. Soviet planners accepted the possibility of fighting and winning a nuclear war, but United States policy stressed deterrencediscouraging the use of nuclear weapons by threatening nuclear annihilation and millions of deaths in retaliation.

Only secure retaliatory forces could make the threat credible, and that led the United States to develop the "Strategic Triad"long-range bombers, land-based missiles, and submarines, each force independently able to inflict catastrophic damage on an attacker.
Posted by Unknown at 12:25 AM