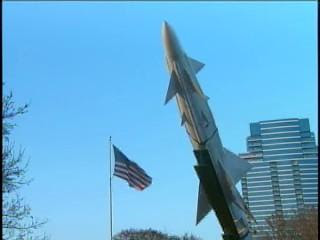 The "Nike Ajax" arrived Wednesday evening in downtown Grand Rapids. It's part of an exhibit titled "America and the Cold War."

Developed in the early 1950's, the US military intended to use the missiles as the last line of defense against Soviet bombers. The military installed 250 of the missiles throughout the country until 1979, guarding large cities and industrial centers.

The missile is on loan from the Selfridge Military Air Museum.
Posted by Unknown at 3:31 PM