On Jan. 1, 2012, the Department of Defense was scheduled to implement a new Memorandum of Understanding for schools to accept TA on behalf of enrolled service members. Unfortunately, leading institutions across higher education found the new MOU to be prohibitively restrictive, requiring many schools to drastically overhaul administrative and academic policies by January 1, or be locked out of the TA program. 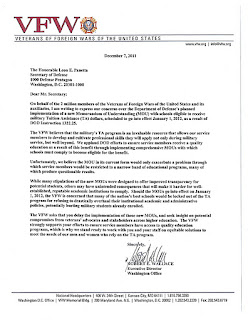 The VFW heard from several top schools that stood to lose their TA eligibility should the new MOU take effect, which is why VFW advocates called on Defense Secretary Leon Panetta to delay the MOU's implementation, pending further review.

The new MOU is designed to offer more transparency for potential students and curb predatory and deceptive practices among schools of questionable quality which were potentially eligible to participate in the TA program. The VFW has consistently applauded the Pentagon for taking decisive action to ensure service members have access to quality education, but the new MOU caused many leading institutions to balk at the binding requirements, while some of the schools the Pentagon sought to reign in had no problem signing the new memorandum.

The Pentagon once again listened by extending the signing deadline to March 12, 2012, which will provide schools more time to hammer out details and sign the comprehensive MOU to ensure quality educational opportunities for service members without limiting student access or compromising academic integrity.

The VFW was not the lone voice in the fight, as many of the nation's leading veterans' advocates and 52 bipartisan Senate offices also sent letters to Secretary Panetta, asking for a delay in implementing the new MOU.

According to the Pentagon, more than 320,000 service members took advantage of TA in 2011. The VFW has been a strong proponent of the TA program's value, which helps service members not only hone skills they will use in the military, but also prepares them for careers beyond military service.

Your VFW will continue to advocate for quality educational options for American service members and veterans, ensuring benefits like TA and the GI Bill continue to prepare our nation's future leaders. If you have a success story from the military's TA program that you would like to share, please tell us in the comments section below.